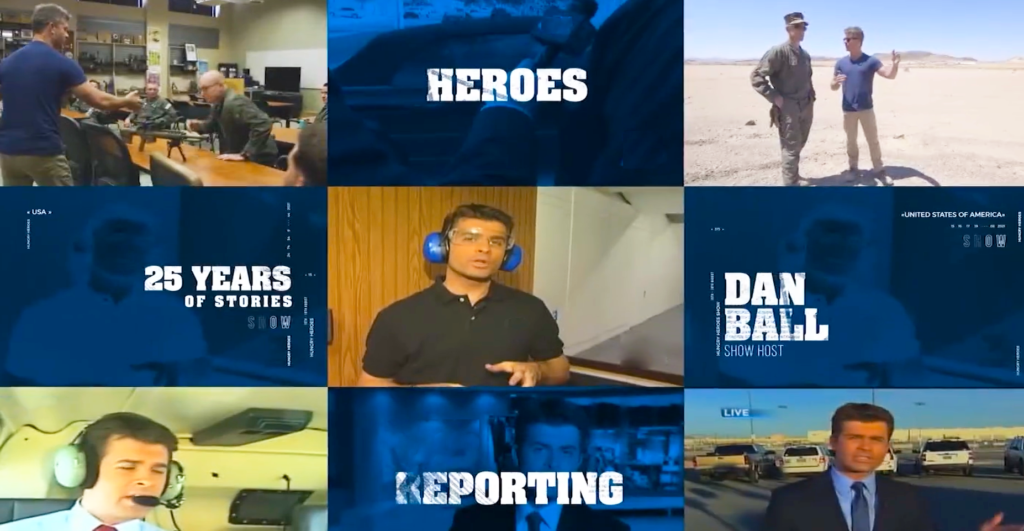 Mortach Financial is a proud sponsor of Hungry Heroes.

If you are retired or looking forward to retirement click the button below or call
877-GAINS-4-YOU  or visiting  mortachfinancial.com to see how we can help you.

Discovering what fuels our heroes minds, bodies and souls! This 30 minute high energy reality show, highlights the hard work of heroes who have dedicated their lives to the service of others. Hungry Heroes is hosted by “Real America” talk show host, Dan Ball. Each episode displays Dan’s enjoyment of riding the open roads of America, seeking out good hearty food and his commitment to honoring heroes from all walks of life.

Emmy award winning journalist Dan Ball is currently the host of “Real America”, the Number #1 Primetime talk-show on the One America News Network. Dan is a true patriot, who has dedicated his life to the service of his fellow Americans. Dan grew up in the small Northwest Ohio farming village of Archbold. Dan hails from a middle class, divorced family, the middle child of 5 boys, he understands the issues and concerns of the hard working American family. Dan was primarily raised by his maternal grandmother, who taught Dan about the importance of conservative and Christian values. During his junior year in high school, Dan watched as America went to war with Iraq, that inspired him to enlist in the United States Air Force as a journalist.

He believed one of the best jobs in the military would be keeping our brave troops informed and entertained while they serve abroad. After completing his tour of duty, Dan began his 25 year career in broadcast television news, serving communities such as, Las Vegas, Fresno, Palm Springs and Philadelphia. Like many patriotic Americans, Dan became frustrated with the gridlock and partisan fighting in Washington so he decided to do something about it. In 2017, he launched his bid for California’s 36th Congressional District, a seat once held by Sonny and Mary Bono. Unfortunately, the establishment had other plans and so did Dan. After the loss, he remained focused and became an outspoken conservative voice, which made him quickly realize that he would not be welcomed back into the extremely liberal and biased mainstream news media. Sticking to his convictions and beliefs, Dan searched for a platform that would allow him to serve conservatives and other patriotic Americans who were being silenced by Democrats, big tech and the woke cancel culture mob. In 2020, the Herring family, owners of One America News gave Dan that platform and “Real America” was born.

Dan’s show is an hour long, high energy political talk show featuring political leaders and news makers of the day, ranging from elected officials and social media influencers, to conservative celebrities and everyday real Americans! For Dan, the conservative movement and mission is not just a job or even career but a way of life. In fact, it’s a family business, his fiancée, Peyton Drew works as his Talent Producer for Real America. In his spare time Dan enjoys, hiking, hunting, fishing, target practice and spending time with his teenage daughter Avery. In addition to his role as host of Real America, Dan also travels the country, speaking to Republican and conservative groups along with making appearances on conservative talk radio, tv and podcasts.

Committed to serving others and highlighting heroes who serve their fellow man, Dan is proud to announce that he will be launching a brand new reality show, Hungry Heroes” on OAN and its sister network AWE this summer! The show will feature Dan travelling our great nation, profiling heroes, getting his hands dirty doing their jobs, then breaking bread with them, all in an effort to show America how our heroes fuel their minds, bodies and souls.

An individual that puts service before him or herself. A person that dedicates his or her life to helping others. Heroes come in many forms.

Hard times don’t create heroes. It is during the hard times when the ‘hero’ within us is revealed.

Watch latest episodes of Hungry Heroes every week on OAN or by clicking here.

If you know a hero or group of hereos that would like to be featured on our show please fill out the form and let us know.

Additionally, if you would like to donate to Help us highlight our local heroes please let us know by filling out the form.

Now you can catch up with missed episodes and new content. Don’t Forget to like and subscribe to ensure you never miss an episode of Hungry Heroes again!